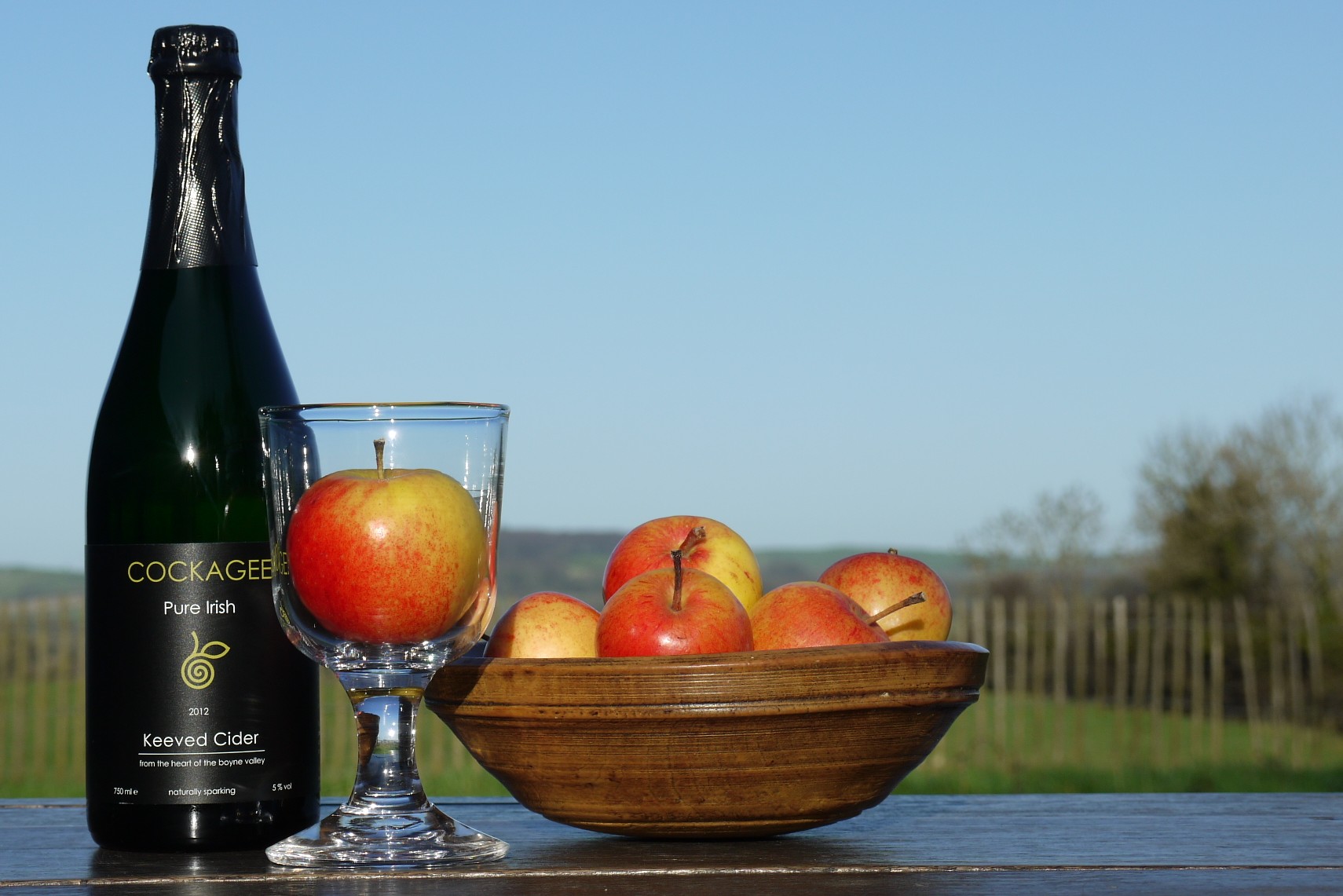 Cockagee – Our somewhat unusual name is a revival of the once famous Irish Cider Cockagee first mentioned in 1664. Originating from the Irish language ‘Cac a gheidh’ which translates as ‘goose turds’ and refers to the yellow/green colour of the fruit from the Cockagee apple tree. In the same way that ‘Duck Egg Blue’ is a colour descriptive, ‘Goose Turd Green’ was once a common colour, although I doubt you’d find it on a Farrow & Ball paint swatch nowadays. This once famous Irish cider was often referred to as Champagne Cider and compared to the finest French wines. A description of the Cockagee apple from the 19th Century says…. A very old variety of Irish origin but it’s real history seems lost. The flesh is yellowish white, firm and crisp. The Juice is moderately plentiful, of an amber colour and a harsh austere taste, and as a cider fruit it has long possessed the highest repute, being sold into the Queen’s household at £10  10s, the hogshead. This apple triumphs over all others in sauce, tarts and pies, as much as it’s juice does in cider. I have been researching the fascinating history of this remarkable (and now thought to be extinct) Irish apple tree for many years, and also searching for the tree itself in old orchards both here and in the UK, grafting and planting any potential candidates in our orchards. Watch this space for dedicated pages on the history of the Cockagee apple and Cidermaking in Ireland. In the meantime check out A Brief History for an article I contributed to Cider Ireland on the history of apples and cidermaking in Ireland. This article was adapted by Pete Brown and Bill Bradshaw for the Irish section of their book World’s Best Ciders.

Pure Irish – While it goes without saying, our ciders are Irish and Pure, this could also refer to the modern Hiberno-English ‘Pure Irish’ meaning of the word Cockagee ………..for those who can see the unintentional double entendre !

Keeved – An ancient cider making technique by which only the very finest and highest quality ciders are made. Sometimes referred to as the French style or method, as all quality French Ciders are Keeved. However, Keeving was always practiced in Ireland in the past and we are the first to produce an Irish Keeved Cider in Over 100 years. The Keeving process is not the easiest thing in the world to explain as it is more intuitive than an exact science and has taken me almost 10 seasons of cidermaking  to master. Many ciderist’s regard it as an Art form and the pinnacle of the cidermakers skill, however I would personally put it down to perseverance and attention to detail. It is a technique whereby the fresh pressed cloudy apple juice is clarified by a natural pectin gel which traps any particles and impurities, this gel then rises to the surface of the juice by the action of yeasts, leaving a crystal clear and clean apple juice to be syphoned off from underneath the gel into another tank ready for fermentation. The fermentation then commences at an imperceptibly slow rate over a period of 6 to 8 months or more. It is then hand bottled and further matured for a minimum of 6 months before release. The whole concept of this technique is to produce a cider with naturally retained fruit sugars along with the intense apple flavours and aromas from the original apple must. This results in a naturally sparkling and ‘live’ cider that has not been filtered, pasteurised, sweetened or force carbonated at the bottling stage.

Cider – A refreshing alcoholic beverage made from 100 % apple juice, fermented and made in the same way as wine and often called apple wine in other countries. An excellent alternative to wine as a food accompaniment that deserves more exploration and creativity in terms of the unwritten principles of matching Cider with food.

Cockagee Cider has recently received a number of prestigious Irish and International awards. 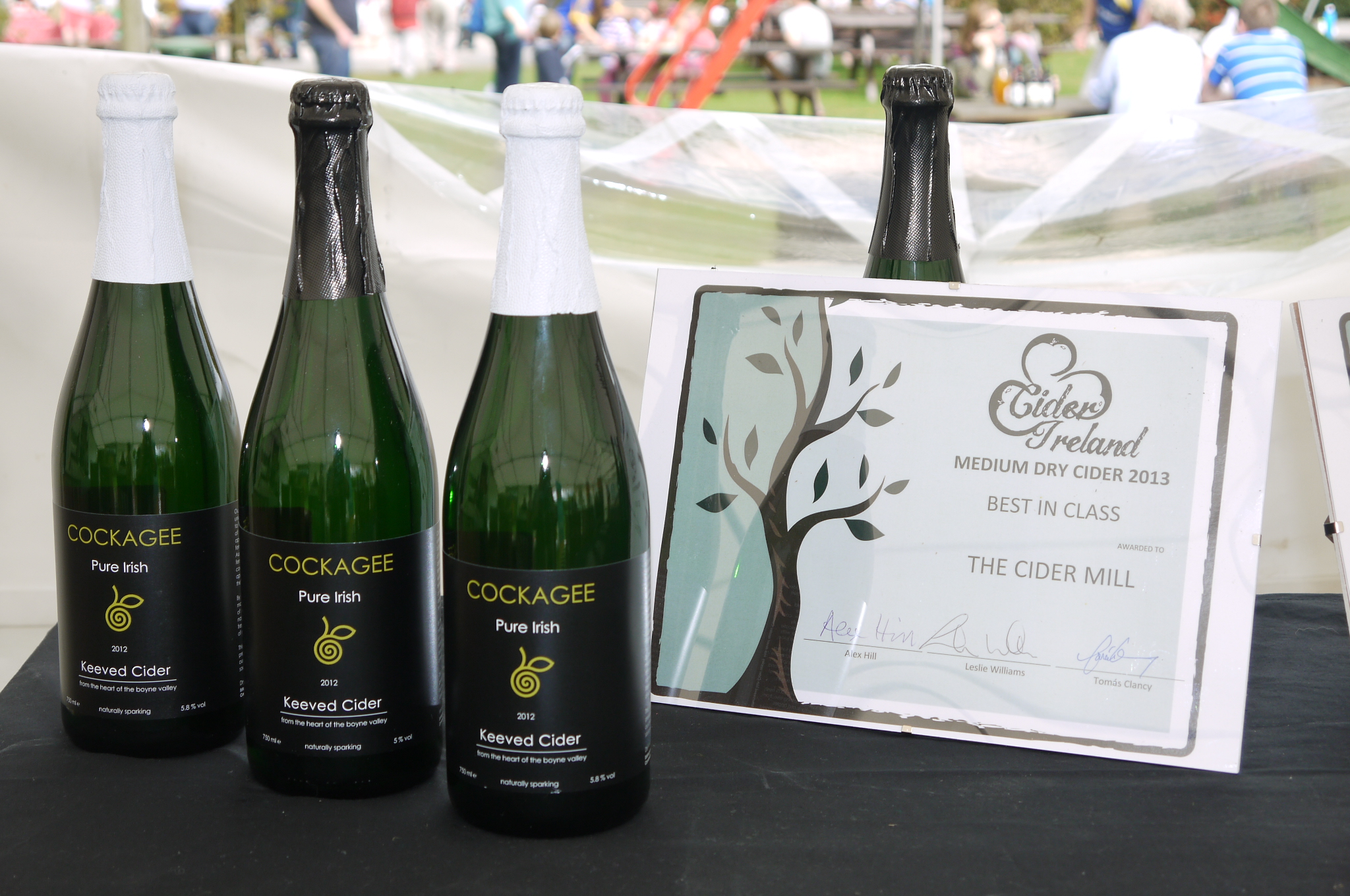 Patience is a virtue.

Please be patient while this site is built.

Our naturally sparkling Keeved cider is unique in Ireland, being the only Irish Cider to be made using the ancient technique of Keeving.

TASTING NOTES
Delicate fresh apple aromas and rich fruit flavours, a robust and full bodied, complex cider with a soft natural sparkle, bittersweet twist and long dry finish. Serve chilled in a stemmed glass (never over ice in a pint :-) enjoy on it's own or as a food accompaniment. An ideal Irish and local alternative to Prosecco, Champagne or Cava etc.